You are here:
FIVA 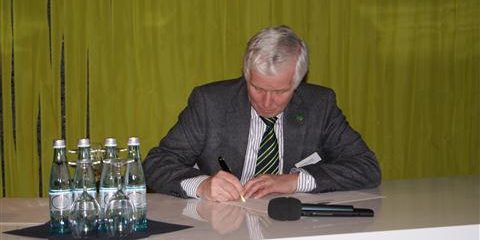 The January 29, 2013 is a landmark date for the international movement of “Old Car & Motorcycle“! From the press release announcing the signing FIVA in Stuttgart of “Μagna Carta” what is nown as ‘Turin Charter‘. Below is a summary of the ‘Press Conference’ of January 29 made ​​on the premises of Mercedes-Benz Museum:

Brussels/Stuttgart, 29 January 2013 – It was on 29 January 1886 that Carl Benz received patent no. DRP 37435 for his three-wheeled vehicle with a gas-powered engine from the Imperial Patent Office in Berlin. This dates signified the birth of the automobile and marked the beginning of personal transportation. Today, exactly 127 years later, 29 January 2013, the Turin Charter comes into force, having been adopted by the Fédération Internationale des Véhicules Anciens (FIVA) General Assembly in October 2012. This policy paper highlights the cultural and historical importance of the automobile and advocates the responsible treatment of historical vehicles. These principles and guidelines provide support for owners of historical vehicles in the use, maintenance, repair and restoration of their vehicle. The charter is a landmark document, recognized worldwide. It is FIVA’s reaction to demands from international political organizations such as the EU Parliament and UNESCO, joining the ranks of the Barcelona Charter for the protection of historical ships and the Riga Charter for the protection of historical railways.

In the Turin Charter, FIVA safeguards the right to drive historical road vehicles on international public highways. “If we want to be able to experience classic cars in the future, we must make sure they are recognized as a part of our culture worth protecting now”, according to FIVA president Horst Brüning. And that doesn’t mean putting old vehicles in museums. “Quite the opposite, we hope this charter leads to people seeing more classic cars on public roads. This is the only way to share their history and the fascination they hold with everybody”, Brüning continued. The charter instructs users to maintain as much of the original vehicle as possible in its running and restoration, to document all work undertaken and, of course, to maintain its road-worthiness.

Highlights from the press conference FIVA in Munich on 29/01/2013: http://www.fiva.org/Gallery/Press%20Conference/index.htm

The General Assembly of FIVA elects Patrick Rollet as Its new President
November 21, 2013